We’re back in Svalbard. After a six week hiatus in England (which appeared to be mostly underwater) and a rather underwhelming November spent in the town of Alta, Northern Norway, (basically a social experiment on whether boredom can kill) we’re back in 24hr darkness. Svalbard is finally living up to its billing as an Arctic desert as there doesn’t seem to have been any snow since we left. January finds the islands mostly composed of wind-blasted ice, scrubbed bare by animated snow that either collects in natural troughs or sweeps inexorably into into the sea. 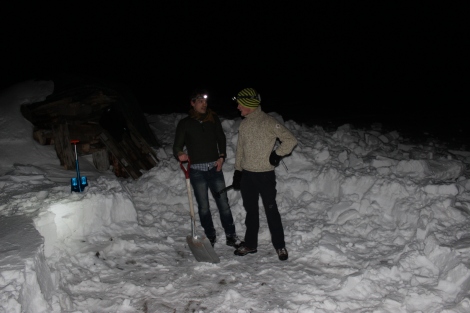 Cees and Morten chat while digging out the foundations for the tent. In the background is the firewood pile

I arrived on the 15th and have not seen the sun since – the darkness, particularly beyond the city lights of Longyearbyen, is overwhelming. Perhaps this allows you to appreciate the different types of dark. The snow faithfully reflects the sky above, so that when it is a cloudless night the whole landscape is painted with starlight. When it is cloudy, the artificial glow of Longyearbyen stains sky and earth alike.

It is in this darkness that we have built our new home; a canvas tent to take myself, Morten and Cees through the winter. Arriving at our campsite (chosen in daylight last year) our first task was locating the spot we had flattened for the tent. Here seemed to be one of those unexpected snow troughs, meaning we had to guess from the location of our firewood pile where it was that we had intended to site our home and dig through a yard of snow to uncover it. Luckily, we hit the spot bang on. 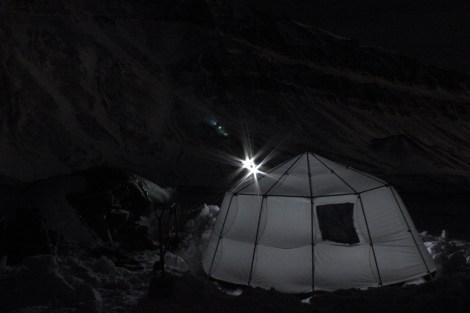 The frame and inner of the tent go up

We couldn’t have asked for better weather to get started, with temperatures a mild -5C and the capricious winds lying dormant. The tent was assembled relatively easily and apart from one heartstopping moment when it took off completely, taking the combined efforts of all three of us to prevent the Svalbard wilderness from claiming it for its own, construction was completed with minimal difficulty. Thinking our task pretty much complete, we retired to the town for a meal and a beer before heading back late to set up the bear-flares. Svalbard, it transpires, was merely holding its breath. 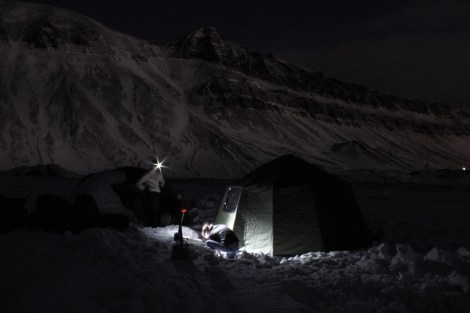 Securing the foundations of the tent 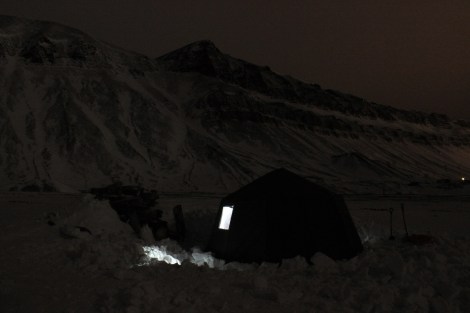 Calm before the storm

The wind had awoken with a vengeance, buffetting our tent and scouring our bare flesh. Our flare system (ostensibly newly developed) proved extremely fiddly to assemble with shaking hands and it was almost two hours of working in the freezing, rushing dark before we had a half-passable system. Too exhausted to make it any better, we retired for what may be the most frightening night of my life thus far.

The pressure of the wind was unceasing and the cracking, flapping noises it extorted from our tent were unnervingly like the sound of a bear-flare detonating. They were frightening enough for what they actually represented; the possibility of our shelter finally yielding and being torn away above us. We lay awake in the roar, imagining the world’s largest land carnivore prowling undetected just yards from us. 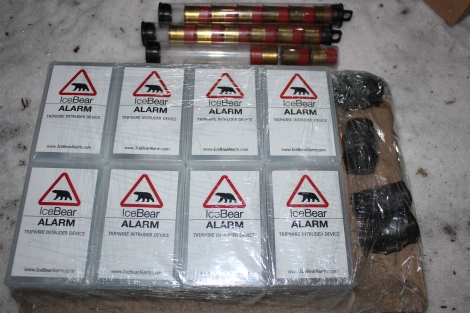 Every night since that one, we have improved our situation. The bear-flares proved their worth in the storm, with the wind alone unable to set them off – which means we can trust them when they do detonate. We have doubled them up and tightened the trip-wire so that now nothing can get within five yards of us without setting off a double or possibly even four-fold explosion. Our oil-lamps and reindeer skins have arrived, creating an atmosphere of warmth and comfort. Camp beds too. We now have something resembling a home in which we can sleep securely, though we are still waiting for customs to relinquish our wood-burning stove, without which it feels as though we have set up residence in a freezer.

Cees, with a slightly upset stomach and in serious need of a loo, dug us a latrine in record time. Unfortunately he wasn’t quite quick enough. He returned flecked with snow.  “The good news is I’ve finished the latrine. The bad news is, I crapped myself.”

“Yup,” he said rummaging around for a fresh set of underwear.

I hope nothing does set off our flares, because we only have 16 rounds and no hope of ordering more – they have already gone out of production. Should we run out, our only option is to replace them with shot-gun cartridges. The sight of a bear crashing through our tripwire accompanied by a hail of lead shot seems like one we should avoid, so we’re trying hard not to use rounds unnecessarily.

You may notice that many of the photos in this update look rather similar. Despite the presence of my splendid new Canon 600D, there is only so much one can do with permanent night-time. I was hoping for some shots of the Northern Lights but unfortunately the sun is going through a rather inexplicable quiet phase. This should be the solar maximum, the peak of our star’s 11-year cycle, but solar activity has all but vanished. I can only hope it returns soon so I can include some better pictures in the next update. Until then folks.

Our tent in the foreground, Longyearbyen glowing behind

2 responses to “Life in the Freezer”