After six long months, I am back in the more southerly latitudes of the UK. It’s been a hell of a year, which culminated in a month spent at Isfjord Radio – the abandoned radio-station-turned-hotel on Svalbard’s West Coast. There wasn’t much free time in between my duties as a Maitre D’-cum-guide but, when I was able to get out of the station, there was an autumnal wilderness at my disposal and two loyal huskies, Marfi and Ozzy, to accompany me.

The tundra is littered with ancient whale bones and Arctic foxes yap through an almost-perpetual fret. On one memorable walk, a wary gang of seals trailed us along the coast as we stumbled across the remains of an old trapping station. On another, we caught a glimpse of a mother polar bear and two cubs as they retreated from the station.

The dish that once broke Svalbard’s isolation, now superseded by a fibre-optic cable 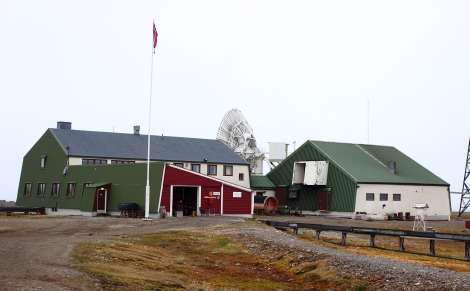 Now I am back in London, boiling hot and feeling restless. As ever, colder climates call. I thought I would enjoy being able to venture outside without wrapping myself up like a parcel; thought too that I might enjoy cooking with an oven, rather than a wood-burning stove. Perhaps sleeping in a bed was going to be a relief, or not having to walk for an hour and a half to get to a shop, a shower or a loo and back. Now I am here, I discover that all I have really missed is the people – my family and friends. I want to be back in my Arctic wilderness. 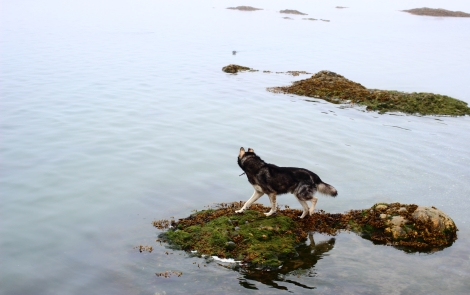 My loyal companion Marfi, fascinated by an approaching seal

I have read a lot this year, in my little canvas home in the snow. The Worst Journey in the World by Apsley Cherry-Garrard struck a particular chord for its inclusion of just one passage: “The stars are steel points; the glaciers burnished silver. The snow rings and thuds to your footfall… and over all, wave upon wave, fold upon fold, there hangs the curtain of the aurora.” Though he was writing of Antarctica, it fitted perfectly with my experience of Dark-Time Svalbard, when it is brutally, immaculately cold and you live encased in a dome of stars.

My home for the last six months 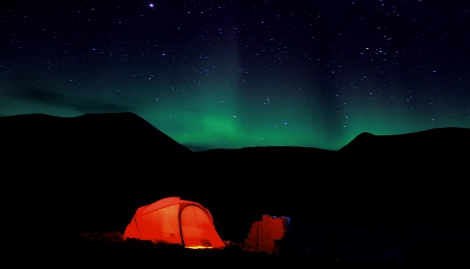 “There hangs the curtain of the aurora”

I could write a treatise on Svalbard’s skies alone. They are at their best when a deep, bruised purple or perhaps for the month they are caught in perpetual twilight. The snow below acts as a canvas for the light above, making land and sky a single entity that breathe and sigh as one. I have never been somewhere so close to the heavens. On an overcast day, everything becomes so profoundly white that mountain and cloud fuse in the state known as “flat-light”. Inclines become invisible; descending a mountain is a leap of faith as you place one foot in front of the other, hoping to be caught by snow. It is a white-out, a place your eyes can see but not understand; where terrain is evaporated by cloud. The “Cold Edge” is exceptionally well named: the rim of the earth, where land and sky meet.

It has been a joy to become so well acquainted with it this year. The moment of arrival feels truly transformative, and has always reminded me of the scene in The Return of the King when Gandalf explains death to Pippin. “The grey rain curtain of this world rolls back, and all turns to silver glass. And then you see it…”

“All turns to silver glass”

There is beauty everywhere on Svalbard, from the subtle interaction of greens and browns on the summer tundra to magnificent, snow-clad mountains and rumbling glaciers. However, the most wonderful thing about the place is the challenge it provides. Here in London, I have not a single opportunity to exercise the extent of my physical and mental capacities; nothing that requires endurance, intelligence and moral willpower in combination. This is what leaves me restless.

It seems to me that man has forgotten what it is to live well. What is easy has become synonymous with what is good. Our celebrity culture, so horribly vapid that I can scarcely credit that it isn’t from some dystopian vision of the future rather than my own age, venerates those whom we perceive to have it especially easy. “How splendid it must be to live that way,” we think as we see the endless wealth of people who have their every physical need catered for. There appears to be no recognition of the need to exercise and test all aspects of your character in attaining a truly satisfiying life.

It also appears to result in something of a role-model shortage. Looking back, I wonder whose behaviour I was supposed to admire and emulate growing up. Celebrities? Politicians? Sportsmen? 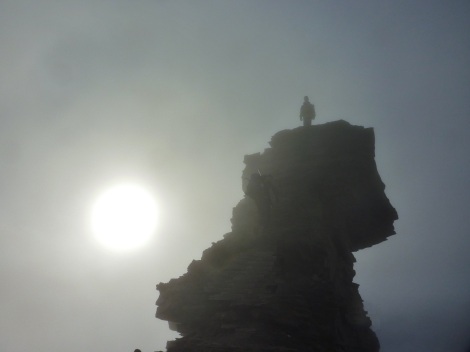 Climbing “The Troll Stone” on a hunting trip this year

It was to history that I ended up turning: to the heroic roll-call of Scott, Nansen, Mawson and Shackleton above all. Of Shackleton, Cherry-Garrard writes: “For a joint scientific and geographical piece of organization, give me Scott; for a Winter Journey, Wilson; for a dash to the Pole and nothing else, Amundsen: and if I am in the devil of a hole and want to get out of it, give me Shackleton every time.” This sentiment is echoed again and again by those who knew the man.

Raymond Priestley: “When disaster strikes and all hope is gone, get down on your knees and pray for Shackleton.”

Frank Wild: “Shackleton privately forced upon me his one breakfast biscuit, and would have given me another tonight had I allowed him. I do not suppose that anyone else in the world can thoroughly realise how much generosity and sympathy was shown by this; I do, and by God I shall never forget. Thousands of pounds would not have bought that one biscuit.”

Roald Amundsen: “Sir Ernest Shackleton’s name will always be written in the annals of Antarctic exploration in letters of fire”

My arrival on Svalbard last year

This year, I got to test myself again and again, battering through every comfort zone that I have. I am proudest of what myself, Cees and Morten achieved in our tent. In spite of six dark, cold months spent at very close quarters and with considerable discomfort, we never argued and my friends were never less than a pleasure to be around.

When we first arrived, we had no stove, no light, no beds, a storm raging outside and a bear-flare system we could not trust. The tent felt as though it was about to be ripped out of the ground. It took us two freezing months to acquire an adequate stove. We worked together to keep snow from engulfing the tent; to chop firewood, to keep a perimeter secure from the world’s largest land carnivore and to maintain the all-important morale. Even when the melting snows flooded over our floor in May and we could not reach our home without plunging knee-deep into a river of icy slush, my companions just laughed about it. We joked and talked every day. When the bear-flares detonated, we leapt as one, rifles in hand, to the defence of our home (except the times when Cees had to put his contact lenses back in). Throughout all this, I’m not aware of a single cross word having been exchanged. It has been an honour and a joy to share that experience with two such excellent men.

I have created a video of the last six months which can be viewed here: https://www.youtube.com/watch?v=Hf_iqmLst-8 Compared with what I have produced so far it’s rather good. I’ll be back to Svalbard in just a week’s time. I really can’t stay away, and as I’ll be visiting Greenland and Iceland as well, I’m sure the experience will warrant another update. Until then, I leave you with a  passage from The Last Battle by C. S. Lewis, which serves to describe the Cold Edge wonderfully.

“Perhaps you will get some idea of it if you think like this. You may have been in a room in which there was a window that looked out on a lovely bay of the sea or a green valley that wound away among the mountains. And in the wall of that room opposite to the glass there may have been a looking glass. And the sea in the mirror, or the valley in the mirror, were in one sense just the same as the real ones; yet at the same time they were somehow different — deeper, more wonderful, more like places in a story, in a story you have never heard but very much want to know… [Svalbard] was a deeper country: every rock and flower and blade of grass looked like it meant more. I can’t describe it any better than that: if you ever get there you will know what I mean.”