Yesterday, I took advantage of the freedom granted by having a snow mobile and took a day-trip to Barentsburg. It took us 8 days to get there and back on foot in the Autumn, so to manage it in just a few hours is a mark of how my horizons have broadened since purchasing Sex Panther. Despite steady improvement, Barentsburg remains fascinatingly depressing. The snow, so bright and clean in Longyearbyen, is layered tar-black in Barentsburg; contaminated by coal dust from the local mines. The best food it could muster was a burger-like object, served by a magnificently disinterested receptionist at the local hotel.

It is just as well then that I did not go to see Barentsburg – I went because yesterday was the first time I have seen the sun in two months. Our days have felt the sun’s influence, flat and white, for some weeks now. But our star merely skims the Arctic horizon, not rising high enough to be seen above the peaks that enfold us. So we left Longyearbyen and its sheltered valley and headed for the Russian Coast and sunshine. There is not much to write about that: seeing the sun for the first time in two months is quite as glorious as you would imagine. Svalbard is returning to how I remember it – cold and bright.

Perhaps not as beautiful to you as it was to me – the sun’s first rays after two months of dark. Taken at the start of our first ski-trip this year

We have just returned from 8 happy days adrift in the wilderness on our first ski excursion, which started where it all began for me; Janssondalen. Here was our first basecamp on our 2010 expedition and my first experience of wild Svalbard. Unfortunately, I did not start the trip in any state to appreciate what should have been an immensely nostalgic experience owing to having just contracted flu. I should probably have stayed at home for this one. Not only were the first few days an enormous physical exertion but I managed to pass the virus onto the only person brave enough to share a tent with me – poor Anniken, who had to be taken home a few days later.

Overwhelming feelings of guilt aside, I was delighted that I was able to continue. There is something about Arctic winter trips that is good for the soul. Rising blearily to melt snow for the day ahead, still enveloped in your sleeping bag. Carving out a space for your tent in the spindrift. The brilliant, bright light that radiates from everything. The pure, intense cold.

Pulking up Adventdalen, the sun just catching the mountain-tops

Skiing is part of the joy. Being able to cut through a perfect white blanket so effortlessly allows you to feel entirely comfortable in  your environment. I am constantly being reminded by my Norwegian classmates how poor the English language is and in the word ski, they may have a point. The Norwegian term, while spelt the same, is pronounced shee. As we were told by Norwegian outdoors legend Nils Faarlund when he came to lecture us in Alta, the Norwegian term is far more onomatopoeic. Shee, a word so similar to the noise you make while gliding over the snow, seems much more appropriate.

The flat light of a Svalbard evening

The course was about establishing winter routines, deepening our knowledge of avalanche terrain and practicing constructing winter bivouacs; everything from the igloo to the snow-grave. For me, it was also a lesson in photography. Behind every break in the clouds, unearthly green light had stained the sky. Against a back-drop of starlight liberated by the true darkness of the wilderness around us, it made for some splendid photography opportunities. Invisible in the photos but magnificent to the naked eye is the presence of Jupiter, which has brooded among the stars for some months now.

My best photo to date of the Northern Lights

Perhaps not as unique as they once were, having recently appeared as far south as Woking in the UK

One of the excursion highlights was a totally unexpected encounter we had at our 2nd basecamp. One night, on polar-bear watch, Arne and Ola spotted a red flare soaring into the sky from a nearby glacier. On Svalbard, this colour is reserved for emergencies so our teachers abandoned their dinner and took a snow-mobile out to investigate. Coming across some ski-tracks, they followed them to an enormous ice-cave beneath a glacier where a Dutchman was camping.

It turns out that he was only testing his signal-pistol but we all met this fascinating individual the following day. The first thing to say about him is that you cannot believe anyone has so much face on one face. His chin, lips, nose, eyes and brow all rank as amongst the very largest that I have seen, with his eyes magnified still further by a pair of enormous spectacles. When quizzed, he revealed that he had been living beneath the glacier alone and in the dark for the last 3 months (though he did not really seem to have an answer when we asked him why). Among the vast collections of kit he had brought were an exercise-bike that he could use to generate his own electricity and an incongruous pot-plant – the only piece of decoration evident in a double-decker igloo that he had constructed.

He evidently makes a habit of undertaking highly original ventures in the Svalbard wilderness, talking us through the occasion he had kayaked down from Newtontoppen – Svalbard’s highest mountain. Eloquently describing careening over rapids and dodging ice-bergs, he concluded with the observation: “Crazy ride, man.” This eccentric figure is becoming somewhat legendary on Svalbard; Sysselman has had to rescue him several times from ill-advised ventures in the wilds. 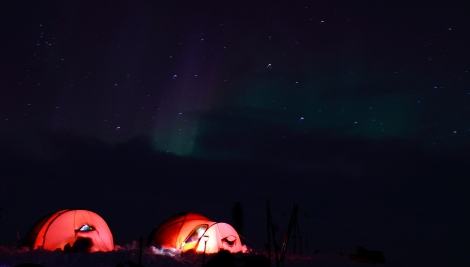 The Northern Lights make another appearance

The trip was fantastic, but mostly acts as preparation for the one we are due to have two weeks from now, when we head into the wilds to locate frozen seas on which to train. Sea-ice is proving particularly elusive this year; warm ocean currents and an extraordinarily mild winter thus far mean it has only formed in the most sheltered bays. We even had rain a couple of days ago; nothing short of disturbing at this time of year. March is supposed to be the coldest month that Svalbard offers.

Perhaps the mildness thus far has been no bad thing, as the stove we acquired (the one which was almost a month late arriving from England) turns out to have been crap. To me, a stove seems a fairly basic piece of design so I have no idea how it is possible to get it so wrong but for some reason, it simply did not draw enough oxygen to sustain a fire that could warm our tent. We have therefore rejected it and purchased a new, far more efficient model that we tested for the first time last night. Let the cold come!

An explorery photo of myself, taken on the windy day we packed up our first basecamp

One response to “Starlight”