You may’ve noticed that in previous updates, I have been rather reticent on the subject of temperature, perhaps surprising given that this is a blog about the Arctic. The simple truth is that up until now, the climate here has been somewhat embarrassing. This winter was almost a complete write-off, with days on end hovering around 0C. On average, for the 3 months I have been here since returning after Christmas, it has been 15C warmer than usual at this time of year. Sea-ice has been almost completely unable to form and the snow was even melting steadily away to leave Svalbard bare and naked.

This has all changed. We have just returned from 8 days spent in the field on our winter ski excursion, colder than anything I have yet experienced. You can tell it’s -15C when the hairs in your nose begin to freeze. At -20C, your breath crystallizes on contact with the air and ice crystals begin to grow on your face and clothes. This is about the temperature of a household freezer. At -25C, touching your bare skin to exposed metal will burn as though it were searing hot. If you let it, the freezing temperatures will bond metal and skin like superglue (as happened painfully to Cees while pressurising his fuel bottle). At -30C, it seems that your gear begins to simply disintegrate. Plastics and metals alike become brittle and crumble with rough handling. Zippers snap off their clothing, fuel-bottle pumps must be treated with extreme delicacy to prevent irreversible damage, map cases and dry-sacks crack as they are unfolded, tent poles shatter enragingly and batteries and electronics cease to function at all.

My face after pulking in -20C, eyelashes frozen painfully together 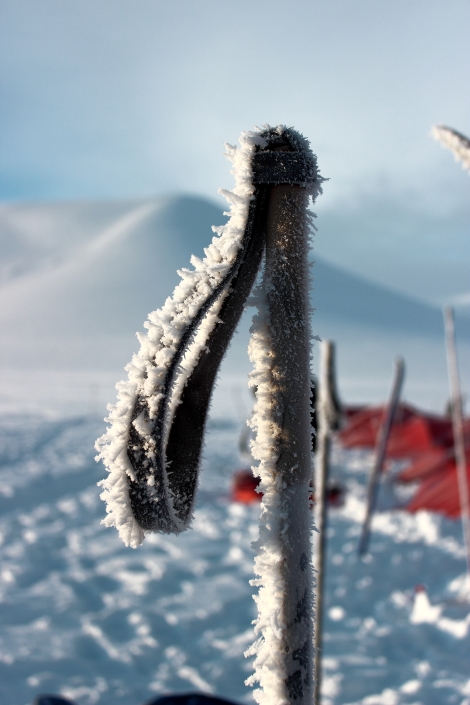 It grew colder yet. One night atop the Slakbreen, a gentle glacier rising to 700m elevation, stands out as particularly punishing, with temperatures below -30C. As I write, I can still feel my fingertips tingling where the frost has begun to nibble at them, even through down expedition mittens and wool liners. My thumb is white and blistered with frost-bite from an especially cold midnight polar bear watch. There are not many of us who escaped without some frost injury to face or fingers. In the case of one of the guests we were guiding from the college of Volda, a combination of frost-bite to her foot and hypothermia meant that she had to be evacuated spectacularly by helicopter. 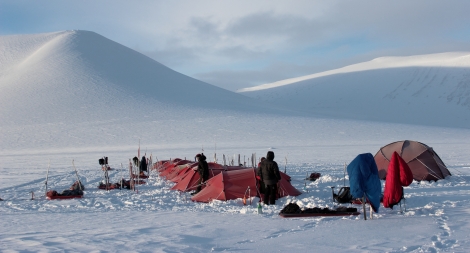 The sun rises on our campsite at Slakbreen

Anniken stands on a frozen lake, enjoying the sunlight near Svea

It has been my favourite excursion so far. Life in this cold is so very, very different. You are like a child again – able to explore the properties of the materials around you afresh. Metals burn to the touch; plastics crumble like badly-fired pottery; snow is a dry powder that groans as you move over it and ice is as likely to melt as rock.

We travel by skis, dragging a pulk loaded with our gear. I love the art of pulking. In deep powder snow, you are forced to travel one-by-one so that only a single person need break the trail and the rest of you are free to travel in their track. This provides you with an hour of solitary, dedicated thinking. You can reflect, envisage scenarios and order your head. Or if you’re bold, you could start singing and hope other people join in. In firmer snow, you can move next to one another and it is unadulterated social time, where all you have for entertainment are each other. Every hour, you break for ten minutes to stare vacantly at gorgeous Arctic scenery, eating as much chocolate as possible to sustain you over the next hour.

Our destination on this trip was the only major settlement on Svalbard that I had yet to explore – the originally Swedish mining community of Svea. The place is completely industrial – half a dozen barracks host the miners who visit on fortnightly shifts. It is from here that the vast majority of coal on Svalbard is extracted and it would have been fairly uninteresting but for the colossal earth-moving equipment that it hosted. Trucks large enough to move a small mountain pulverise the earth beneath them on the road to the mine. A dozer, so enormous that at first sight it appeared to be a regular-sized one that was ten times closer than in reality, rumbled across Reindalen, fighting against breathtaking inertia. You feel such enormous things simply shouldn’t move faster than a glacier. 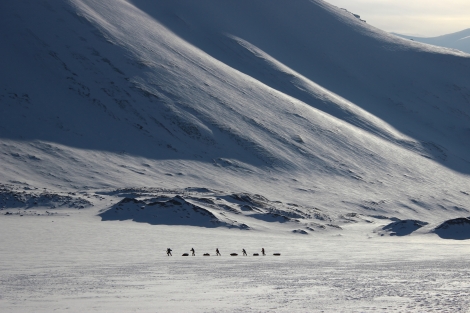 This is a dizzying place to exist if you are the size of a man. Reindalen itself is a valley carved out by an ancient glacier so enormous that it takes almost a day’s pulking to cross. For hour after hour, the mountains opposite grow no closer and you find yourself adrift in a sea of white, unable to make any impact on the terrain in any direction.

On the final night, we stumbled across five perfectly constructed snow-caves in the “kantgrup” style. Myself and my tent-mate Torbjorn seized one eagerly, installed a chimney so that we could burn a stove inside and spent a happy night within, completely oblivious to the howling winds outside our walls that blew away our largest tent as poor Arne, who always seems to be on polar bear watch when these things occur, looked on in dismay. 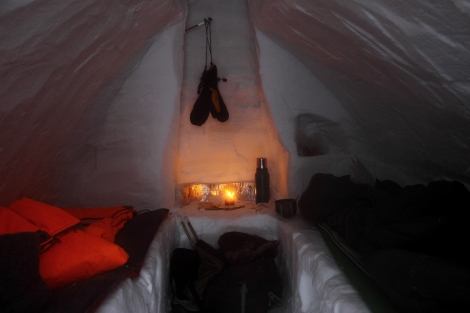 Mine and Torbjorn’s abode for the final night

The strange thing about this wonderful trip, which could have lasted weeks longer from my perspective, is that it means my course here is almost over. Now the students disperse to their respective guiding companies and begin working for them in earnest, learning their trade as guides. When this is over, there is little left to do other than sit the final examination.

I mentioned earlier that on this trip we were hosting some students from the college of Volda in Norway and treating them as guests. These students, all experienced outdoorsman in their own right (they were studying outdoor living at Volda) underlined to me just how much we have learned over the past year. It did not feel unnatural or uncomfortable to guide them through this wilderness. It leaves me anticipating my future work (currently scheduled to be dog-sledding and ski-guiding) keenly. There will be many more adventures to come.