The next time I shall see a sunset will be on my return to the UK (currently scheduled to be July). From these Northern latitudes, the sun now hovers above the mountain-tops, spinning around the horizon for the next four months and thawing these forgotten islands. I am no stranger to twenty-four hour sunlight, having experienced it for two months on my last expedition here. Perhaps its most unexpected effect is that when outside you never feel tired. Instead your thoughts grow slower and slower, with basic tasks becoming ponderous and confusing. The extent to which you are sheltered from tiredness becomes clear when you venture inside a dark tent or room and pass out rapidly. Sitting or lying in one place for more than a few minutes becomes extremely hazardous for productivity. I have to keep apologising to my tent mates, Morten and Cees, for falling asleep during conversations with them and only awaking the next morning. 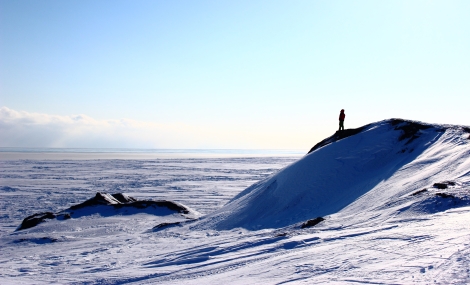 Cees looks out for bears on Svalbard’s East Coast

Perhaps the 24hr daylight is why I have felt so tired lately, or perhaps it is because it now feels as though this adventure is coming to an end (though I have another three months to go in the tent). Nevertheless, I have been extremely busy, hosting a kind of reverse Viking invasion in which I have flooded Svalbard with English guests. It was a delight to be able to share this place with friends from home, particularly as these friends had all been here the first time around. Svalbard was already full of shared experiences for us, but we made room for plenty of new ones in between all the nostalgia.

The highlight of my first visitors’ time here was a sun-drenched snow-mobile trip to the East Coast on the lookout for polar bears. The day was glorious and the mountains and blue ice on display made it a truly splendid trip. However, there was still no sign of the elusive polar bear. If it were not that so many of my classmates have now encountered them (sometimes at distances of less than 100m) with the photographs to prove it, I would begin to suspect that their existence was merely a rumour spread by the guiding companies to boost tourism. My time to find one is rapidly running out – once the snow has melted and the snow-mobiles have been put away for the summer (generally mid-May), my access to the archipelago will be drastically reduced.

We kept a safe distance from the glacier; though you wouldn’t know it, the ice in this picture is 40m high

When I purchased Sex Panther, I was aware that I had significantly reduced my chances of surviving this year, a reality which was underlined to me on the way back to Longyearbyen. Driving in convoy up a steep hill, my eyes were on the terrain and not the scooters in front of me, which made an unexpected stop to adjust layering at the top of the slope. Driving at some speed, I did not see that they had halted until it was too late. By the time I had realised the scooters in front weren’t moving, I was already aware that I did not have time to stop before I hit them. I slammed on the breaks at the same time as screaming at my friends to keep driving, just in case they could react in time. They couldn’t.

My vision became tunnel-like and my mind cleared, animal-like and enslaved to one basic instinct. I just had time to aim the speeding vehicle in between the two in front to minimise the impact before an almighty collision. Myself and my passenger were hurled forwards, me stopped by the handlebars and her by one of the scooters we had hit.

Stunned seconds that felt like minutes were all it took to establish that everyone was unscathed, after which my thoughts turned to the scooter. With the force of the collision, I was certain that I had written it off which, 100km from Longyearbyen and without enough scooters to get everyone home, would have necessitated a helicopter evacuation. Separating it gingerly from Cees’ machine, I was utterly astonished that it seemed to be in-tact. Pressing the start button, the engine purred contentedly. It was an utterly freak result – I had hit the other two scooters almost perfectly with the strongest part of my own and we were able to continue with nothing more than the nauseous feeling of a near-miss. 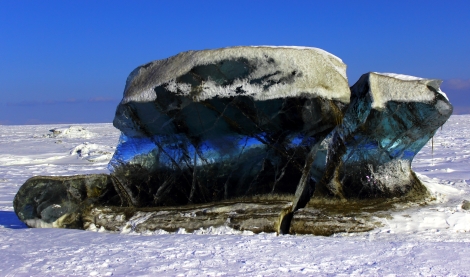 An iceberg trapped in the sea-ice at Moonbukta 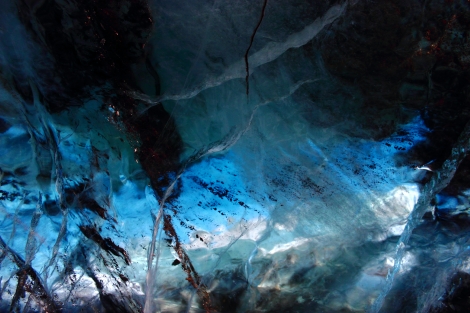 The smoky patterns evident in the iceberg; more spectacular by far in real life.

The extreme fortune of this reminder is not lost on me – these are dangerous machines. Cees, working as a snow-mobile guide during his practice placement, has been involved in two serious accidents. In the first, a faulty throttle caused his scooter to flip over spectacularly. In the second, he lacked the requisite power to make it up a particularly steep slope whilst towing a sledge and ended up tumbling back down, settling at the bottom of the slope with the heavily laden sledge resting on his head. This last required neck and back X-rays (fortunately clear). 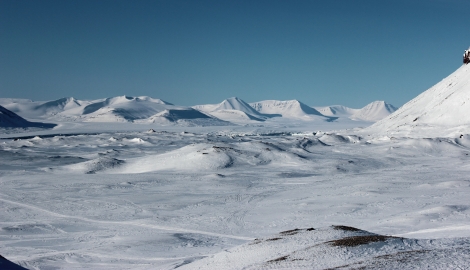 Svalbard on a spotless day 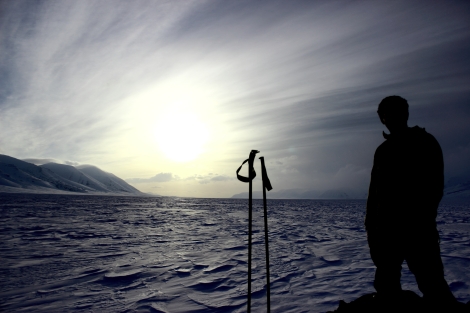 It was with a heavy-heart that I bade the last of my friends farewell; the tent is considerably less chaotic now but also much quieter. I have relentlessly attempted to fill the void with work for Basecamp, which culminated in a momentous event last Friday: my first paid guiding. I received a late distress call from my boss, asking whether I could take an Italian man ski-touring. This was well out of my comfort-zone – downhill and on mountain skis in particular (very different to standard piste or touring skis) I am not a strong skier by anyone’s definition so it seemed unwise to take it on as my first solo guiding. However, my uses for Basecamp are already decidedly limited by my inability to speak Norwegian or drive a car so I was determined to take on any work that I could. Besides, battering through comfort zones has become the norm here. Nothing ventured, nothing gained.

The less said about my skiing on the day, the better and the Italian didn’t speak much English. It is therefore a mystery to me why he thought I’d earned a £50 tip and insisted I meet his wife. Imagine how good I’ll be when guiding in an activity I’m competent at. The epic two-week trip I have coming up to Svalbard’s highest mountain (Newtontoppen, 1713m) should provide just such an activity (if I manage to complete it). Unfortunately, the company running the expedition has just had to evacuate a group doing the exact same trip from the field due to storm-force winds tearing away much of their equipment. Whatever happens will, I imagine, warrant another update. ‘Till then.